In 2012, the number of Japanese students studying abroad finally returned to positive growth after seven consecutive years of decline.

The Japanese Economy has been recovering since Mr. Shinzo Abe returned as Prime Minister in December 2012 and announced the “Japan Revitalization Strategy” in 2013, which included university reforms and measures to support study abroad. Globalization is a key word. The Ministry of Education, Culture, Sports, Science and Technology (MEXT) is striving to globalize universities and high schools across Japan. Japanese companies are making efforts to hire and develop global human resources to promote further global expansion. The Japanese government wants to develop youth who can contribute to Japan’s global success and competitiveness.

In 2013, the Japanese Government called for doubling the number of students studying abroad (university students to 120,000; high school students to 60,000) by the year 2020, the year that Tokyo hosts the Olympic and Paralympic games. The Japanese Government allocated 15.3 billion yen (approx. C$153 million) in the 2014 fiscal budget to fund study abroad scholarships, aiming to raise the number post-secondary level scholarship recipients to 32,500 students from 10,200 in the previous year, and high school scholarship recipients to 3,600 from 300.

Tobitate Ryugaku Japan is a campaign to promote studying abroad launched by MEXT in 2013. Collecting donations from more than 100 private sector businesses, MEXT has created a new scholarship program under this campaign called the “Public/Private Study Abroad Support System.”

Partnership agreements at the secondary school level are increasing as well. In 2014, 2,102 Japanese high schools have overseas agreements, up from 1,909 in 2012.

Languages Canada reports that 52,823 students enrolled in member programs in BC in 2013, with Japan being the top source country with 9,876 students. 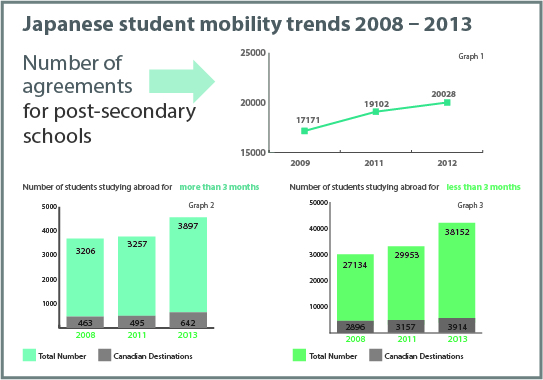 Japan’s study abroad market now has the potential to grow in each of the main education sectors: post-secondary, K-12, and languages. I believe that demand by Japanese institutions for partnerships and teacher training will continue to grow offering BC educational institutions opportunity in these areas.